The “Microphone Records” recording company is delighted to announce a new and interesting Latvian – Estonian duet “Linnamuinasjutt” (City fairytale)  by two talented singers Lauris Reiniks and Luisa Värk. On April 25, 11am Estonian Radio 2 will play this song for the first time on  “Kuulderaadius” programm. The same night Channel 2 (Kanal 2) will present a “Linnamuinasjutt” music video on “Reporter” newscast  at 7pm.

A composer of the song is Lauris Reiniks, lyrics were by Martins Freimanis, but Estonian adaptation of lyrics was created by Leelo Tungal. “Linnamuinasjutt” is Estonian version of Lauris Reiniks and Aisha’s popular Latvian duet song “Pasakā” (In a Fairytale) from Lauris’s 2010 award winning pop-album “Es skrienu”.

Luisa Värk is a young and well known Estonian artist as well as the runner-up of 2008 “Eesti otsib superstaari” (Estonian Idol) TV show. Luisa has released one studio album titled “Tunnete Allee”. Lauris is known to Estonian public with his last year Latvian hit song “Es skrienu” that he recorded in Estonian language “Ma jooksen”. “Ma jooksen” was offically in Estonian Top20 of most popular songs in 2010, also becoming a club hit in Estonia.

“I was not really planning on recording something more in Estonian, but after “Ma jooksen” good success in Estonia my new Estonian fans kept asking me for one more song in Estonian language. It was’t hard to pick the right song, because people did it for me, saying that they’d love to hear this song in their native language. A song “Pasakā” that was already very popular in Latvia. I felt honered and blessed when the great Estonian writer Leelo Tungal agreed to work with me for the second time, did a really beautiful translation of lyrics and so the “Linnamuinasjutt” was born”, tells Lauris.

This is not the first time that Lauris is singing together with some Estonian female singer. Back in 2005 Latvian and Estonian radio stations were hit by a song “And You Came” perfomed by Lauris Reiniks and Maarja-Liis Ilus.

“I am excited to sing with the Estonian singer again. Luisa is a perfect duet partner for this song. She has everything I was looking for – great looks, beautiful voice and most important she has that positive energy and she is very likeable young lady! I found her on youtube and google while looking for Estonian singers. I was really touched by her performance of “I Will Remember You” on “Eesti otsib superstaari”.  I truly hoped that Luisa would agree to sing with me and I was very happy that when I approached her with this proposal, she said yes!”, explains Lauris.

Luisa shares her thoughts, too: “I was really suprised and confused when Lauris called me one morning and offered to record a duet with him, because I didn’t know much about his music and activities in Latvia. But when I heard the Latvian version of a song I immediately loved it without understanding a word. After reading a beautiful translation of lyrics by Leelo Tungal, I knew I’d said “Yes” to this idea. Lauris is a great musician and he listens to others’ advice, too. His Estonian language sounds really good and I am very happy with a result!”

The “Linnamuinasjutt” music video was filmed in Tallinn, Estonia and tells a romantic story of two people in different cars who notice each other and realize that maybe they have finally found each other. They both have the same idea- to leave their cars and meet in a middle of a street. Screenplay was written by Lauris Reiniks, Directed by Aija Strazdiņa (JUMP studio), Camera – Uvis Burjans. 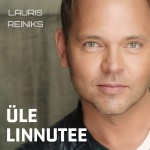